Horticulturist Kelly Norris has a favorite task in his Des Moines front yard: puttering. By that he means meandering, leaning into a plant for a closer look, wondering which birdsong he’s hearing, and eventually trying to remember where he dropped his trowel. “I’m pretty tightly wound, and the garden helps me chill out,” he says. The only regular work his yard needs is a quick mow of the path to the front door. Everything else is left to grow as it likes. By late summer in his garden, “everything has grown in and feels as comfy as a well-worn sweater,” Norris says.

Norris has long found his happy place in nature. He remembers being captivated as a child by the prairie near his grandmother’s Iowa farm. “I’m an Iowa boy and prairies are our heritage,” he says. When he bought his current home, a 1940s Colonial Revival, a few years ago, he decided to re-create those wild spaces in his own yard. “It was my chance to craft something very personal,” says Norris, the former director of horticulture and education for the Greater Des Moines Botanical Garden and author of the book New Naturalism ($20, Amazon).

Today, nearly every square inch of the front yard (previously an expanse of compacted turf) is planted with the kinds of airy grasses and wispy flowers that are often found in Iowa’s prairies. Norris relies heavily on Midwestern natives but mixes in plants well-suited to his climate. (Favorite sources include prairiemoon.com and thepollennation.com.) Selecting only plants that grow shorter than 3 feet tall helps prevent the meadow from feeling overwhelming, though it is hardly tamed. “I don’t think of my garden as somehow under my control,” Norris says.

Beyond mowing down the plants in spring, Norris mostly leaves the garden alone. That gives him more time to putter about and see what bird or butterfly grabs his attention. And plenty of them are drawn to his garden, thanks to its diversity of plants. “Our gardens are not separate from the world around us,” he says. “Even the smallest patch of green helps connect to the larger ecological quilt.”

Our gardens are not separate from the world around us. Even the smallest patch of green helps connect to the larger ecological quilt.

Planting and Caring for a Meadow Garden

By choosing plants that are native or well-adapted to your region, you save yourself time and money. When he moved in, Norris tore out the existing lawn then planted seedlings. (Plants flourish when planted young and are allowed to grow in their new home.) He also scattered seeds of annuals and biennials. Although he watered the first year, Norris has since let rainwater provide all the irrigation. “Turns out that clay soil is good for something,” he says of its water-retaining abilities.

Norris continually refreshes the mix of plants by collecting seeds from spent flowers, then scattering them around the garden. He rarely prunes, just trims here and there when something catches his eye, and he occasionally mows the path. Leaving seed heads in place provides a food source for birds and gives the garden structure in winter.

Related: How to Create a Beautiful Pollinator Garden for Butterflies and Bees

The only big garden job happens in early spring, when Norris mows the entire meadow, rejuvenating growth. All the clippings stay where they land, sending nutrients back into the ground. And because he chose plants that naturally thrive in his native soil, Norris doesn’t need to apply fertilizer.

Elements of a Meadow

You don’t need to plant a whole front yard meadow to reap the wildlife benefits. Experiment with just one border. Norris relies on the following three categories of plants to keep his meadow looking good.

A base layer of shorter prairie grasses and sedges holds the meadow together, keeping the entire garden full-bodied and soft. Norris thinks of this category as knitting together the landscape or as the grout between tiles. “These plants fill all the blank spaces, leaving no voids,” he says. Some examples: ‘Tara’ prairie dropseed, ‘Blonde Ambition’ grama grass, and white-tinged sedge.

Small shrubs, trees, or structured perennials help break up a landscape of airier plants. Norris often leans on chokeberry, leadplant, red osier dogwood, and small junipers in his garden. In a small border, Norris uses only one or two structural plantings; in a larger patch, he likes to cluster a few plants of the same species.

Abundant in Norris’s yard, flowers offer both beauty and function, as they’re important nectar sources for pollinators. Norris plants them “with great artistic license”—that is to say, wherever he thinks they’ll look good. Some of his favorites include whorled milkweed, hogwort (aka woolly croton), heart-leaved wood aster, and tickseed.

Obstacles Linger, Even in Face of Uptick

Wed Sep 8 , 2021
Article For the first time in five years, homeowner interest in larger homes increased over the previous 12 months, along with demand for finished spaces as well as outdoor living space. Home designs that accommodate accessibility and aging in place also continue to remain popular among architectural firms whose practice […] 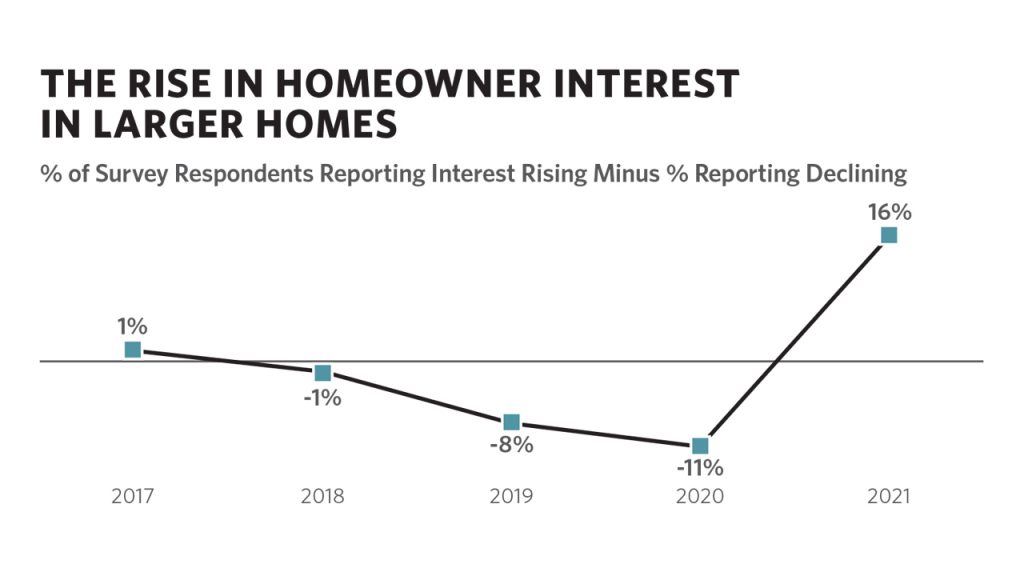