It’s ice cream season, but in truth, there really is no beginning or end to it. At least not for me. There’s an undeniable charm in saddling yourself with a few heaping scoops from the local ice cream shop, and nothing is easier than picking up a pint at the grocery store. But an at-home electric ice cream maker affords some creative liberties (and savings) that make the frozen sweet treat machines worthy of consideration.

Cuisinart has had something of a corner on the automatic ice cream maker market. The kitchen appliance brand has five or six models in circulation at any given time and many of them are well-reviewed. Ninja is a newer manufacturer that’s impressed me and other CNET kitchen appliance junkies with blenders that punch above their weight and excellent countertop ovens and air fryers (including a hybrid model that topped my recent list following a rigorous category-wide test.)

Just this month, the brand released the Ninja Creami, stepping boldly and coldly into the frozen dessert space for the first time. Ninja’s version of the countertop ice cream maker has some interesting updates from models that preceded it, so I wanted to investigate. I got my hands on the coffee-maker-looking Ninja Creami to test it out and see how well it might satiate my most voracious of summer cravings.

At $200, this is a splurge for an ice cream maker but it’s one of the most user-friendly models I’ve tried, and it churned out some excellent custom ice cream blends. If you’ve got a hankering for homemade ice cream and a little extra coin lying around, it’s a worthwhile (and fun!) addition to the appliance arsenal. If not, there are definitely cheaper options that will net similar results.

How the Ninja Creami works

Using this ice cream maker was simple and there’s no setup required. Along with the machine itself, there are three plastic pint-sized tubs. In each tub, you create whatever sort of frozen treat you want including sorbets (typically just fruit, sweetener and water), gelato and ice cream, which can be full-fat, low-fat or dairy-free. You can also make smoothies and milkshakes with this machine, but so can my blender. I wasn’t as interested in those.

There is an accompanying recipe book of about 30 creations and more can be found online. The recipes have as few as one ingredient such as a one-ingredient sorbet which requires just canned fruit (already swimming in sugar) as well as more complicated recipes that have seven or eight. Most ice creams and gelatos have about four or five ingredients, while the sorbets have just two or three.

After you’ve whisked up a recipe in a large bowl — it generally takes no more than a few minutes — you must freeze your pint-sized tubs of ice cream mix for 20 to 24 hours. I froze one of my creations for a smidge less than that and it came out fine, but Ninja recommends 24 hours, so I mostly stuck with that.

Once fully frozen, you pop the frozen pint of mix into an outer bowl, screw the paddle lid on top and load it up into the machine. Finally, you’ll select the preset for the type of dessert you’re making, and in less than three minutes you have a pint of freshly churned ice cream, sorbet or gelato.

Bring your home up to speed with the latest on automation, security, utilities, networking and more.

What I made and how it turned out

Because the Ninja unit comes with three bowls, I decided to make three different types of frozen dessert: a full-fat chocolate ice cream, a nondairy vanilla ice cream with granola mix-in and a lemon sorbet.

The lemon sorbet was first up and proved an easy recipe. I squeezed half a cup of fresh lemon juice and whisked it with a little less than half a cup of sugar (the recipe called for a half of a cup but I always like things less sweet), one tablespoon of agave syrup and one cup of warm water. After a full-day freeze, I loaded the plastic pint container into the machine and smashed the sorbet button and it whirred for just over 2 minutes. The resulting lemon sorbet was excellent — perfectly smooth with no ice shards. Since I used slightly less sugar than the recipe called for, it was more tart than sweet, a sorbet tailor-made for my tastebuds.

Next was the full-fat chocolate ice cream. This recipe called for some gently melted cream cheese, cocoa powder, sugar, vanilla extract, heavy cream and whole milk. I also snuck in a tiny dash of amaretto-flavored instant coffee for fun. After the obligatory whisk and 24-hour freeze, I put the Ninja Creami machine to work on its ice cream setting. In 2 minutes, I had some rich and expensive-tasting chocolate ice cream with a pleasant hint of amaretto coffee. It was honestly as good as anything I’ve had from a pricey brand and the entire pint didn’t cost me more than a couple of bucks in total.

Finally, I wanted to try a “healthier dessert” and so whipped up a light and low-sugar, nondairy vanilla ice cream with granola mix-in. I did some freelancing on this one, using a coconut and almond milk creamer as the base with my personal favorite zero-calorie sweetener (monk fruit and allulose) along with some good vanilla extract. After the initial mix, I pulled the container and added some chopped-up Munk Pack keto salted-caramel granola bars.

After the first mix, it’s recommended to pull the bowl and add your mix-ins before employing a special second spin setting to quickly remix the batch with whatever you’ve added. The Ninja mixed the granola bits evenly into the ice cream. This was the recipe I was most impressed by, since I took several liberties with the ingredient list and even some of the proportions. It still came out well-mixed and tasted as good as any nondairy frozen dessert I’ve had, with no pesky ice bits to be found.

You can also make smoothies with this machine but not in the way you would a blender. I repeat, this machine does not function as a blender. You still have to mix liquid ingredients and freeze them overnight, which seems like a lot of time just for a smoothie, so I skipped these recipes altogether.

Read more: I tried the $155 Beast blender from NutriBullet’s founder

The big differences between the Ninja and other ice cream makers

Most ice cream makers require you to freeze an inner bowl, not the mixture, and have it fully frozen before you can make ice cream. If you have room in your freezer to keep one at all times — which I don’t — then it’s no big deal. If you also don’t, then you’ll need to plan ahead at least a day in advance and even then you can only make one batch with the frozen inner bowl before it needs another 24-hour freeze.

The Ninja works in reverse

It requires the ice cream mixture itself to be completely frozen but no part of the machine needs such treatment. Because of that, you can make as many varieties as you want in a single day, just as long as you’ve remembered to mix them and freeze them the day before. Nothing needs to be permanently stored in the freezer. You’ll still likely need one day to prepare for ice cream making, but the Ninja is still an improvement on its rivals. Many existing ice cream makers also then take a good 20-25 minutes to actually make ice cream, whereas the Ninja does it in a lightning-fast 3 minutes.

Ice cream makers now come in small packages, but few are as slim and trim as the Ninja, which is less than 6 inches across and 16 inches high.

The short of it

If you have the freezer space to keep the inner bowl of an ice cream machine frozen, you’ll be able to make impromptu batches. If you don’t, the Ninja may be a better pick since you can mix up a bunch of different types, freeze them and then make as many as you want that day.

What I liked most about using the Ninja Creami

First, some quick background: I like ice cream. I like it a whole lot, in fact (hot take, I know). Ice cream is not healthy by any definition, so at a certain point I decided I needed to curb the habit one way or another. Eating less ice cream seemed a hopeless undertaking, but weaving in some varieties with less sugar was far more plausible.

There are several low-calorie and dairy-free ice cream brands that taste amazing — Halo Top and Enlightened among them. There’s just one big problem: Most avoid full-fat milk or cream which means they have more water, making them incredibly susceptible to freezer burn. This happens if the product endures any melting or temperature change in transit or while waiting to be purchased at the store. For me, it’s gotten to the point where I tremble anytime I open a pint of low-cal ice cream in fear of those dreaded cascading ice crystals. A bad batch is only compounded by the fact that they’re also expensive.

With an ice cream maker such as this Ninja (or another for that matter), you’ll always be getting freshly churned nondairy or nonfat ice cream. Unless you leave it out by accident or leave it in the freezer for longer than a few weeks, it shouldn’t develop freezer burn. This is huge for anyone trying to cut a calorie here and there without giving up their beloved frozen desserts.

I also love the freedom to tinker with recipes and use my favorite sweeteners, fruits, mix-ins and nondairy bases. I happen to love Whole Earth’s Baking Blend, for instance, and I think it tastes nearly identical to sugar. With this machine, I can make batches of low-calorie, low-sugar sorbet and ice cream tailored exactly to my taste with far fewer calories. And if my run of testing is any indication, the process is pretty idiot-proof.

Oh, and all this frozen dessert will come at a fraction of the cost. Well, not at first…

At $200, the Ninja is on the expensive side of the automatic home ice cream maker spectrum. You can find pricier models such as the $500 Breville Smart Scoop, but most of the other machines come in around $100, give or take. In general, I’ve found Ninja products to be extremely well made, intuitively designed and durable. This brand’s first entry into the home ice cream-making category appears to be no different.

The Ninja Creami isn’t cheap but I found it easy to use, compact and, most importantly, it churned out some delicious frozen desserts that tasted about as good as anything else I’ve had or bought. If you are a habitual ice cream eater and tend to rack up Ben & Jerry’s tabs like gamblers rack up debt, this could be a good way to lower those monthly costs and have a lot of fun experimenting with recipes.

Is it a little bit annoying to have to plan your ice cream a day in advance? Yeah, kind of, so you’ll have to decide if you have that kind of forethought and patience. Otherwise, it might not get the amount of use commensurate with the cost or end up collecting dust in the cupboard or basement.

That said, the Ninja is also a solid option for people like me who try to layer in some lower-sugar ice cream every once in a while but who are tired of getting, well, burned by freezer-burnt batches. There are cheaper ice cream maker options out there that’ll get the job done, but one smart design innovation by Ninja allows you to make multiple types of ice cream at once, just as long as you remember to mix and freeze them ahead of time.

Contemporary Rammed-Earth House Takes in Camelback Mountain From Every Room 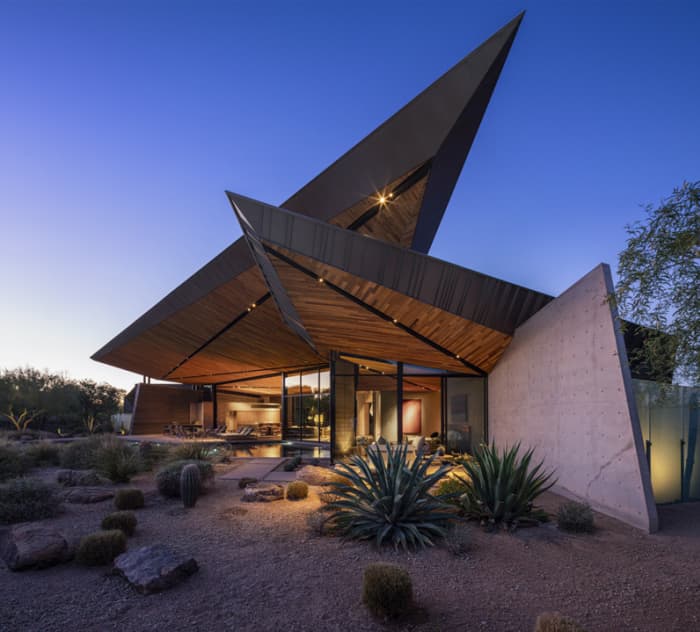