Not every overgrown lawn in Eugene belongs to someone with a broken mower.

Many interested in homegrown fruits and vegetables, native plants and the survival of crucial pollinators continue to transform grass-only spaces. More natural and inviting to the birds and the bees, reimagining a lawn can do a neighborhood an ecological favor.

“It’s very important, from a standpoint of the ecological integrity of your garden, to move away from monoculture and toward a more diverse array of plants in your garden,” said Gail Langellotto, statewide director of the Oregon State University Extension Master Gardener program. “It’s more visually interesting as well as more ecologically resilient.”

Homeowners and gardeners interested in reimagining their lawns can replace some or all of the grassy areas with more diverse and native plants, allowing for a meadow-like and overgrown look or eye-catching wild gardens. Others may want to covert parts of their lawn into produce-producing plots as a way to enjoy their dirt and feed themselves.

Though a lush, grassy lawn can be a safe place for children to play or a comfortable place to sit with friends on a summer evening, front and back yards can be much more.

“If you are not regularly using your lawn for something other than mowing every week, I would think really hard about what you’re doing with that space,” Langellotto said. “If you have reduced diversity at the plant level, you are going to filter out a lot of biodiversity.”

CAFE 541:Lane County garden resources: A primer and a planner for planting season

For Lisa Blendheim, it all comes down to “dirt therapy.” Her Whiteaker neighborhood duplex hasn’t had a conventional lawn for at least the decade she’s rented her home.

“I grew up in suburbia. I was born in ’63 when there was a whole culture of just watering your lawn and fertilizing it so it will grow so that you can cut it so you can water it some more,” Blendheim said. “But I use that space to grow food and flowers and herbs.”

It takes a lot of work to grow more than grass, but Blendheim said she’s happy to do it.

Permaculture (a term derived from “permanent agriculture”) is a design and ecological philosophy where value is placed on simulating nature in gardening and on using space sustainably by growing food and making planting choices to make spaces self-sufficient.

Jan Spencer took a course in permaculture at a Texas university almost 25 years ago and spent much of the time since applying its principles at his River Road area home.

“I bought this place and I knew that it was a good fit,” he said. “What I wanted to do from the beginning was to grow a lot of food here. That was always one of my primary ideals.”

Not everyone in Eugene lives on a quarter-acre lot like Spencer does with room for the olive, fig, apple, almond, lemon and peach trees he planted soon after buying the house.

“Not every suburban property has some of the attributes that I have here, but almost any property has the potential for growing food and being resilient,” Spencer said.

Though Blendheim and Spencer don’t share much when it comes to the size and shape of their homes, both ditched grass-only lawns aiming for something more sustainable.

“I try to be mindful. I grow flowers that bees and pollinators like,” Blendheim said. “Does it require a lot of water? Is it high maintenance? I try to grow a variety of vegetables. If things grow that are considered weeds — like these wild violets — I leave them alone.”

Prevention:Reaping the healthy benefits of gardening

“So many folks are saying they really want to learn more about native plants, where to buy them and how to use them in garden designs,” Langellotto said.

Oregon’s Eden-esque climate offers gardeners a much wider plant palette than many other states, Langellotto said. Choosing native Oregon plants for gardens and lawns can offer a variety of benefits, such as attracting pollinators and requiring fewer resources. Langellotto said California poppy and Douglas aster are two native plant species very attractive to pollinators such as bees, and so is the less-commonly sold globe gilia plant.

“The beauty of a plant is not just the plant itself, but all of the other organisms it can bring into your garden,” Langellotto said.

Though native Oregon plants are naturally adapted to local climates, Langellotto warned some garden and lawn spaces might not ideally recreate their regular woodland habitat.

The perennial Western trillium, for example, would likely wither under the direct sunlight typical of lawns and gardens, she said. But some, like California poppies, will survive.

“Take a look at what are the shade versus sun conditions of that plant and if your site is going to provide what it needs to prosper,” Langellotto said.

“I would also say overwatering can be a problem. A lot of our native plants are adapted to a spring flush and a summer drought, and if we give them water through the season they grow probably more vigorously than gardeners will be comfortable with,” she said.

Native plants are preferred for most gardening projects in Oregon, such as in efforts to repair burned riparian zones after the Holiday Farm Fire in the McKenzie River Valley last year. The city of Eugene established the Alton Baker Native Plant Nursery in 2006, and since the nursery has supplied thousands of plants to 13 city-owned natural areas.

The native plant nursery run by the Friends of Buford Park and Mount Pisgah has supplied metro areas and fire restoration projects, but the group also hosts spring and fall native plant sales.

The next sale, likely around October, will for the first time offer to the public some of the nursery’s woody plants and shrubs, according to Executive Director Janelle McCoy.

“We’re just trying to help our community build resiliency in their habitat. That’s not just with perennials or annuals or even grasses,” McCoy said. “It’s really an expansion of our mission to be teaching the public about what we do at the park and encouraging them to follow the same model at home.”

This list of native plants that could fill your Oregon garden was compiled by Kym Pokorny, a communication specialist with OSU Extension and Experiment Station.

How Much Does Landscaping Cost? Breaking Down the Cost of Maintenance, Planting, and More

Wed Jul 14 , 2021
Photo: istockphoto.com Typical Range: $1,362 to $5,640 National Average: $3,415 Designing and maintaining a beautiful landscape is about more than just mowing and watering the yard—it can involve planting trees and shrubs, establishing perennial beds, and incorporating pathways and lighting. The typical cost for landscaping a yard ranges from approximately […] 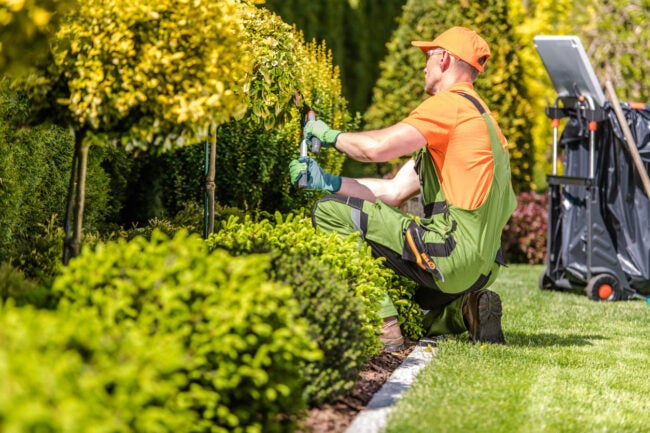