Rachel Nelson, of Grosse Pointe Woods, has described her home as a funky bungalow, or “fun-galow.”

METRO DETROIT — If you’ve ever toured a designers’ show house or hired an interior designer, you’ve seen how interior designers can reimagine a space in a host of astonishingly inventive ways. But how do these designers decorate their own homes?

You can get the answer to that question — as well as ideas for your own home — when the Michigan Design Center in Troy teams up with Detroit Public Television to present a virtual home tour with six professional interior designers from around the state. For $25 for a single ticket or $40 for a watch party, ticketholders will be able to view an hourlong video — hosted by DPTV Senior Vice President of Production Fred Nahhat — at their convenience anytime from Sept. 17 to 27. Net ticket proceeds will support DPTV and its educational programming.

“This is no ordinary home tour! The video interview format allows our host to ask the designers all the questions we would ask, if we were lucky enough to get a private tour of these incredible homes,” MDC General Manager and Executive Vice President Susan Todebush said by email.

This is the MDC’s fifth home tour. All of these events have been fundraisers for local nonprofits.

“It’s a great tradition started by the MDC,” Nahhat said. “We’re more than thrilled to be a part of it.”

Todebush said Nahhat is a “charismatic host,” and the program offers “deeper insight into the design process.”

This year, everyone who purchases a watch party ticket will be entered into a drawing for a $1,000 gift certificate for a shopping spree at the Michigan Design Center.

“They’re going to get an inside look at the homes of these professional interior designers and get their insights on creating their own personal spaces,” Nahhat said. “It’s really interesting to see what these award-winning designers design for themselves.”

Nahhat said the homes, and their interior designs, range from “elegant to eclectic,” and from classic to contemporary.

“It was quite a good mix,” Nahhat said. “I think (viewers) will get some ideas of things to do (with their own spaces).”

After speaking with the designers and seeing their homes, he said all of the designers seemed to share one piece of advice: Homeowners should look at interior design as a chance to express themselves.

“Get unique,” Nahhat said. “Get creative. Suit yourself.”

Because of the pandemic, this year’s event is virtual.

Nahhat said DPTV hasn’t suffered as badly as many other nonprofits during the pandemic — donations remain fairly strong — but other local organizations haven’t been as fortunate. As a result, he said DPTV has worked with a number of local nonprofits to turn their in-person events or fundraisers into virtual or televised events.

“In these dark days, it’s been something of a win,” Nahhat said.

DPTV has done televised or virtual events over the past year for the Concert of Colors, Pope Francis Center and Detroit Jazz Festival, to name a few.

“I’m thrilled we are able to show such a wide variety of designers’ homes, in areas all across Michigan,” Todebush said via email. “It’s been exciting to see this year’s tour come together. You really won’t want to miss it!”

Fri Aug 27 , 2021
From The Trussville Tribune staff reports TRUSSVILLE — A popular unclaimed freight store has moved from Springville to Argo. Shop Bob’s former location in Springville. Shop Bob’s Unclaimed Freight was previously located on Marietta Road, in Springville. It is now at 1947 Gadsden Highway. The business has a Trussville address […] 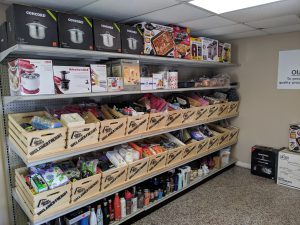