Developers working on the new apartment complex at 3401 St. Charles Ave. won another victory at the Board of Zoning Adjustments meeting on Monday, as board officers unanimously agreed that the project qualifies for a density bonus that allows it to fit more units per square foot.

The complex, planned for the site where a Rite Aid store has been left vacant for several years, will consist of an apartment building on St. Charles and Louisiana and townhouses on the other side of the lot at Delachaise and Carondelet streets. Overall, there will be 115 apartment units and 19,000 square feet of retail space.

The board approved the plans for the building last month, although it denied the developer’s request to build as high as five stories. The site was once a K&B drugstore, then a Rite Aid, and has been vacant since 2018. Valerie Besthoff and Andrew Marcus, the descendants of K&B founder Sydney Besthoff, are turning the site back into apartments designed by architecture firm MetroStudio. 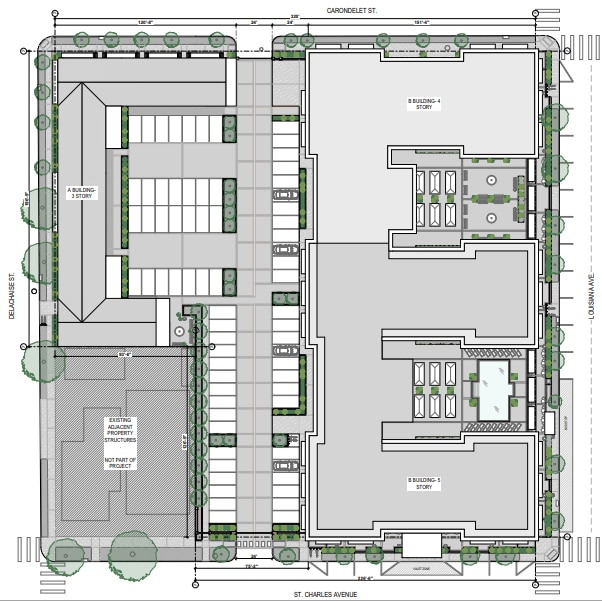 This month the project was up before the Board of Zoning Adjustments yet again as the developers appealed a ruling from the Department of Safety and Permits that would have affected how densely they were allowed to build. The project could not get a building permit until this conflict was resolved.

The city’s Comprehensive Zoning Ordinance states that a project can have a density of 800 square feet per dwelling for residential units that are above or behind non-residential units, as opposed to the usual requirement for 1,000 square feet. The point of this density bonus is to encourage projects that include a mix of both retail and residences.

Proposed design for townhouses along Carondelet Street and Delachaise Street

Safety and Permits argued that, in order to count for the density bonus, the townhouses and the other apartments would all have to be part of the same building. The developers appealed that ruling, saying that they just had to be on the same lot.

“It does not say that it has to be in the same building. It’s not the province of Safety and Permits to change the language, to add something that’s not there,” argued attorney Michael Schneider at the meeting.

Ashley Becnel, the city’s chief zoning official, explained that Safety and Permits had to go with a literal interpretation of the ordinance.

“It’s very clear that it uses the word ‘building.’ It doesn’t use the word ‘lot’ in the definition of dwelling above the ground floor,” she said.

Ultimately, the five members of the Board of Zoning Adjustments agreed with how the developers interpreted the law. They voted unanimously to uphold the appeal.

Reporter Sharon Lurye can be reached at [email protected].

Thu Jul 22 , 2021
Taking care of a lawn is no easy feat — it requires you to get your hands dirty, and it often involves heavy machinery that can be exacting to maneuver. And before you can even get down to the nitty-gritty work of lawn care, you first need to gather all […]