As the Hallyu wave continues, the Korean design scene is also thriving—these fresh talents craft inventive furniture and stunning interiors. These are the names to know

Sign up for our newsletters to get all our top stories delivered.

Much like how the South Korean cultural phenomenon has been making waves around the globe, the Korean design scene has also rapidly evolved, boasting an energetic vibrancy with various noteworthy designers reinterpreting traditional crafts with contemporary designs.

These designers are making waves both locally and abroad; here, we highlight some of the names to know, below.

See also: Hallyu Homes: How To Design A Korean-Style Interior

With a discerning eye for marrying the old and the new, award-winning interior designer Teo Yang has created a reputable name for himself. The designer, who helms his namesake design studio based in Seoul, often mixes elements of Korean traditions into his contemporary designs. His notable portfolio includes revamping a gallery in the Korean Gyeongju National Museum, designing the Korean Cultural Center in China, as well as a karaoke lounge in Los Angeles for major K-pop label SM Entertainment.

Beyond interiors, the multitalented designer is also in a range of fields; this includes designing for British wallpaper house de Gournay and Italian luxury fashion house Fendi, while collaborating with Swiss watchmaker Vacheron Constantin. The dashing designer has also launched his own skincare line, EATH Library.

See also: K-Pop Interior Design Ideas: A Peek Into the Homes of G-Dragon, Jennie and Rosé of Blackpink and More

Born and based in Seoul, Lee Kwangho is known for his contemporary designs that are handcrafted from everyday materials. Heavily influenced by his childhood with his grandparents, Lee reimagines humble materials with traditional techniques to create striking, modern pieces.

Lee’s most iconic work to date is perhaps his chairs and lamps that are weaved together from materials like leather, PVC tubing from garden hoses, and even electrical cables. A fan of exploring form and function, the Korean designer has also experimented with enamel copper works and 3D printing.

The award-winning talent, who was named the artist of the year in 2011 by the Korean Ministry of Culture, is often credited for revitalising the design movement in Korea. Besides product design, Lee has also crafted the interiors of Seoul-based tea house Osulloc and collaborated with luxury fashion labels like Fendi, Bottega Veneta, and Swarovski.

Balloons serve as both a key source of inspiration as well as the primary material used in the collections of furniture designer Yang Seungjin; he’s intrigued by the myriad forms that balloons can take when inflated.

Manipulating the material into a series of stools, chairs, and lamps, Yang’s pieces are made durable by coating the surface of balloons with epoxy resin. The designer’s unique technique allows the furniture to hold substantial weight; he also handcrafts each piece individually.

With cheerful colors and playful curvaceous forms, the vibrant pieces are often found displayed in group exhibitions at places like the Museum of Cultures Milano, Seoul Museum of Art, and international projects such as XXl Triennale di Milano and Design Days Dubai.

With works spanning between product design, art direction, and window installations, Kim Jin-sik experiments with various materials and forms to focus on the connection between objects and people. The designer, who founded his own studio in 2013, creates what he calls ‘functional sculptures’—furniture pieces that double as eye-catching art pieces.

His notable Half Half collection, for example, experiments with the possibilities of reinterpreting stone and metal into geometrical forms and structures. Kim’s work has not only swept up accolades around the globe; he has also worked on collaborative projects with international brands including Hermès, Baccarat and LG.

Kim Jiyoun’s designs often boast contemporary forms combined with a minimalist appeal. The product and brand designer, who leads his eponymous studio in Seoul, is known for his elegant pieces.

The designer’s 52 Degree Collection, a series of chairs that have legs angled at 52-degrees, is a standout example. Conbox, his collection of electric fans, presents another example of the designer integrating the best of both form and function; the strikingly modern fans are designed to be folded when not in use for easy storage.

Product designer Chiho Cheon is a rising star in the South Korean design scene. The young designer draws inspiration from everyday life when it comes to ideas for his designs. Often experimenting with new or unusual materials, Cheon designs with a human-centered approach.

His Criteria series, for example, was inspired by the homeless at Seoul Station. Using a mix of corrugated cardboard and concrete, the pieces in the collection feature rough textural details and tonal variations. The choice of materials—concrete and cardboard—refers to the different living standards in a society. With the collection, Cheon attempts to draw attention to the plight of the homeless; cardboards are used to the homeless to make their temporary residences, in contrast to the concrete buildings that urbanites live in.

The Merge series, a collection of tables and stools, is her most well-known work to date. Inspired by Tongdosa, a Buddhist temple located in Yangsan, South Korea, the collection features bright colours that represent the four seasons of Korea. Melded together through a strict meticulous process of repeated layering and sanding, Ok created various pieces in different colors and forms.

Sat Jul 31 , 2021
News WASHINGTON, DC — Reflecting gains in both new construction and residential remodeling, cabinet and vanity sales, along with domestic shipments of major home appliances, continued their rebound from the impact of COVID-19 in the first half of 2021. According to the Association of Home Appliance Manufacturers, an April-to-June spike […] 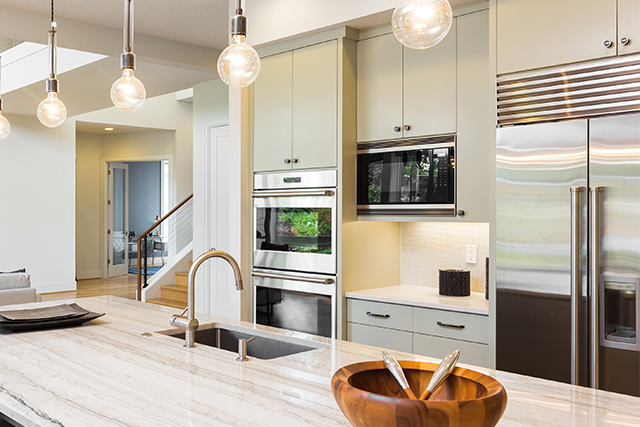